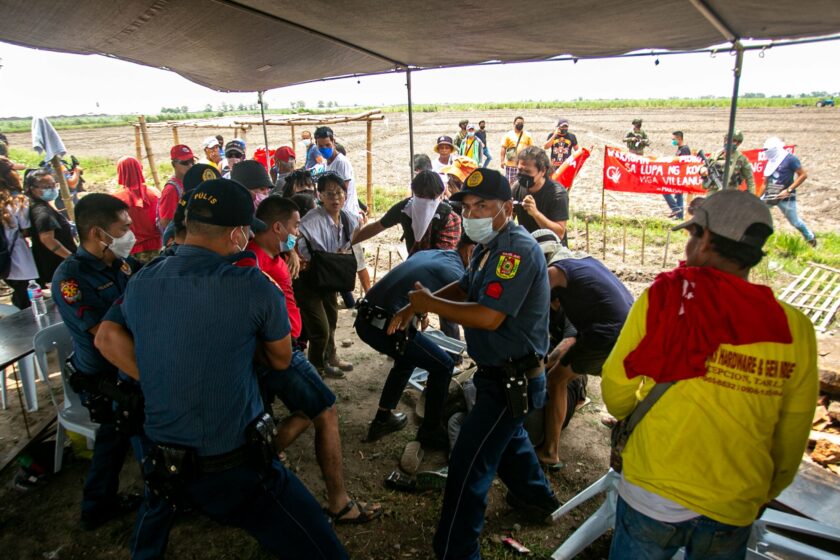 “Destitute farmers face violent reprisals when they assert their legitimate right to land. This exposes CARP as an instrument for landlords while the majority of our farmers remain landless, poor and hungry. »

According to the Unyon ng mga Manggagawa sa Agrikultura (UMA) report, ARBs and Peasant Defenders were peacefully manning a bungkalan or collective farming when members of the Philippine National Police (PNP) and a Regional Mobile Group patrol came arrived in the area, some carrying long guns.

The UMA said those arrested are in custody and will be charged with malicious mischief and obstruction of justice.

“Destitute farmers face violent reprisals when they assert their legitimate right to land. This exposes CARP as an instrument for landlords while the majority of our farmers remain landless, poor and hungry,” Estavillo said, adding their call for the immediate release of farmers and their supporters and holding the police accountable.

Non-settlement of beneficiaries of the agrarian reform

Farmers benefiting from land reform made their call clear when they marched to the office of the Department of Land Reform in Quezon City on Tuesday, June 7, demanding the installation of some 236 legitimate ARBs who all hold a land ownership certificate. CLOA).

They also submitted a protest opposing the DAR’s proposal for what they described as a cumbersome revalidation process, which they say will only favor the family of Tarlac representative Noel Villanueva.

The group said Villanueva claims ownership of the disputed land.

They added that Villanueva would attempt to settle some 468 members of a local farmers’ cooperative, half of whom have already sold their rights to the Solon Tarlac family.

UMA said the land in dispute is a 200-hectare sugarcane property that is part of more than 1,200 hectares of land formerly owned by Benigno Aquino Sr. and inherited by the Aquino siblings, including Antonio Urquico Aquino who then sold the land to Dominican priests. .

“In 1988, said landed property was placed under voluntary land cession (VLT) by the Dominican priests of the Phils. Inc. under Cory Aquino’s Comprehensive Land Reform Act (CARL). The farmer-farmers then asked to become beneficiaries. They obtained their CLOAS in 1998”, specifies the group.

In an earlier statement, Abby Bucad of Makisama-Tinang said farmers decided to collectively farm the land in 2016 due to decades of non-settlement (of land reform beneficiaries).

The following year they filed a petition for installation and in 2018 and 2019 DAR issued a writ of execution and ordered the ARBs to be distributed and installed permanently. However, Bucad said the order did not take effect.

“President Duterte’s term and that of DAR Secretary Bernie Cruz are coming to an end but the farmers still don’t have their land. DAR and Sec. Cruz only has less than a month to get the farmers settled on their land, Bucad said in Filipino.

“The DAR has failed in its duty and obligation to implement comprehensive and genuine land reform. More than three decades after the enactment of CARP, nine out of ten farmers remain landless. ARBs, on the other hand, still cannot pay land depreciation under CARP,” UMA said.

The supporters were also accused of belonging to the New People’s Army, SAKA said in a statement.

When they asked the reason for their arrest, a policeman replied: “NPA kayo”.

SAKA is a peasant advocacy group whose members are artists.

The group said “the police cornered them in a shack, took down its doors, then forced themselves into it to chase the others away. It was the local police chief, then in civilian clothes, who ordered everyone to be rounded up and brought to the Concepcion police station.

“This cultivation of the land, called ‘bungkalan’, is a form of protest in which peasants – usually ARBs – claim ownership of the land by planting agricultural products that mainly meet their immediate need for food. It is a method to guarantee the food security of a peasant community,” the group said in a statement.

“In the case of MAKISAMA, they aimed to grow rice and vegetables on land that had been granted to them by the DAR as early as 1998, but whose collective CLOA was seized by a cooperative run by a local family of bureaucrats, whose the incoming mayor,” they said. added.

Meanwhile, Agham Advocates of Science and Technology for the People called for the immediate release and the dropping of all charges against the 87 people arrested by police.
They also called on the DAR and the Human Rights Commission (CHR) to carry out an immediate and impartial investigation into these human rights violations against ARBs and peasant rights defenders.

“We also challenge the DAR to immediately address the chronic problem of landlessness among the country’s peasants by speeding up the granting of land. As we face another economic crisis caused by increasing energy and food insecurity, we call on the government to provide more support to our farmers who bring food to our tables,” the group said. (RTS, RVO)