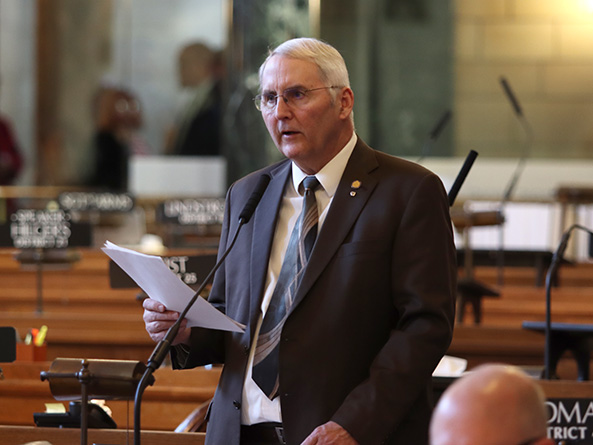 Lawmakers approved in the first round on Jan. 11 a bill that would lower Nebraska estate tax rates while increasing the amount of property value exempt from tax.

As introduced by Senator Elmwood Robert Clements last session, LB310 would have cut rates in half over three years while increasing exempt amounts.

Clements said Nebraska is one of six states to have an estate tax, making it a “bad place to die.” LB310 would spur economic growth by keeping more retirees in the state, he said.

Clements said the estate tax, which in Nebraska is collected by the counties, can seem “arbitrary and excessive” and heirs sometimes have to sell part of their inheritance to pay the taxes owed.

“I think we can do better as a state than to treat families this way,” he said.

A revenue committee amendment, passed 40-4, superseded the bill. Under the amendment, immediate relatives would pay inheritance tax on the net market value of assets over $100,000 received by each person, up from $40,000 previously. The tax rate would remain at 1%.

The amendment would also reduce the rate from 13 to 11 percent for distant relatives and increase the exemption from amounts over $15,000 to amounts over $40,000.

A third rate, currently 18% of the net market value of beneficial interest over $10,000, applies in all other cases. The amendment would reduce the rate to 15% and increase the exemption to amounts over $25,000.

Under the amendment, any interest in property passed on to beneficiaries under the age of 22 would not be subject to inheritance tax.

The changes would apply to estates of people who died on or after January 1, 2022.

Clements said the amendment would reduce inheritance tax collections by 15%, down from 50% in his original proposal.

Senator Lou Ann Linehan of Elkhorn supported the amendment, saying it would make reasonable adjustments to a “very unfair and very regressive” tax that, at current exemption amounts, affects Nebraskas who only inherit modest assets.

Thurston Senator Joni Albrecht also supported the proposal. She said counties could use some of the $375 million in federal coronavirus relief funding they are expected to receive this year to offset lost estate tax revenue, which was about $63 million. dollars in 2020, according to a study by the Platte Institute.

Albrecht said Iowa passed a bill last year phasing out its estate tax over four years, which will make Nebraska the only state west of the Mississippi River with an estate tax. She introduced but later withdrew an amendment that would have eliminated Nebraska’s estate tax by 2028.

Senator Steve Erdman of Bayard supported Albrecht’s amendment, saying county councils would be able to budget for the phasing out of inheritance tax revenue. He said inheritance tax is a “double” tax because people who have died have already paid property taxes on homes and other real estate they pass on to their heirs.

Senator Matt Williams of Gothenburg opposed Albrecht’s amendment. He said American Rescue Plan Act funds had to be spent by 2026, meaning they could not offset the loss of estate tax revenue in the long run.

Senator Adams Myron Dorn opposed the committee amendment and the bill. He said many counties would raise property taxes — their only other major source of revenue — to pay for county services if estate taxes were reduced or eliminated.