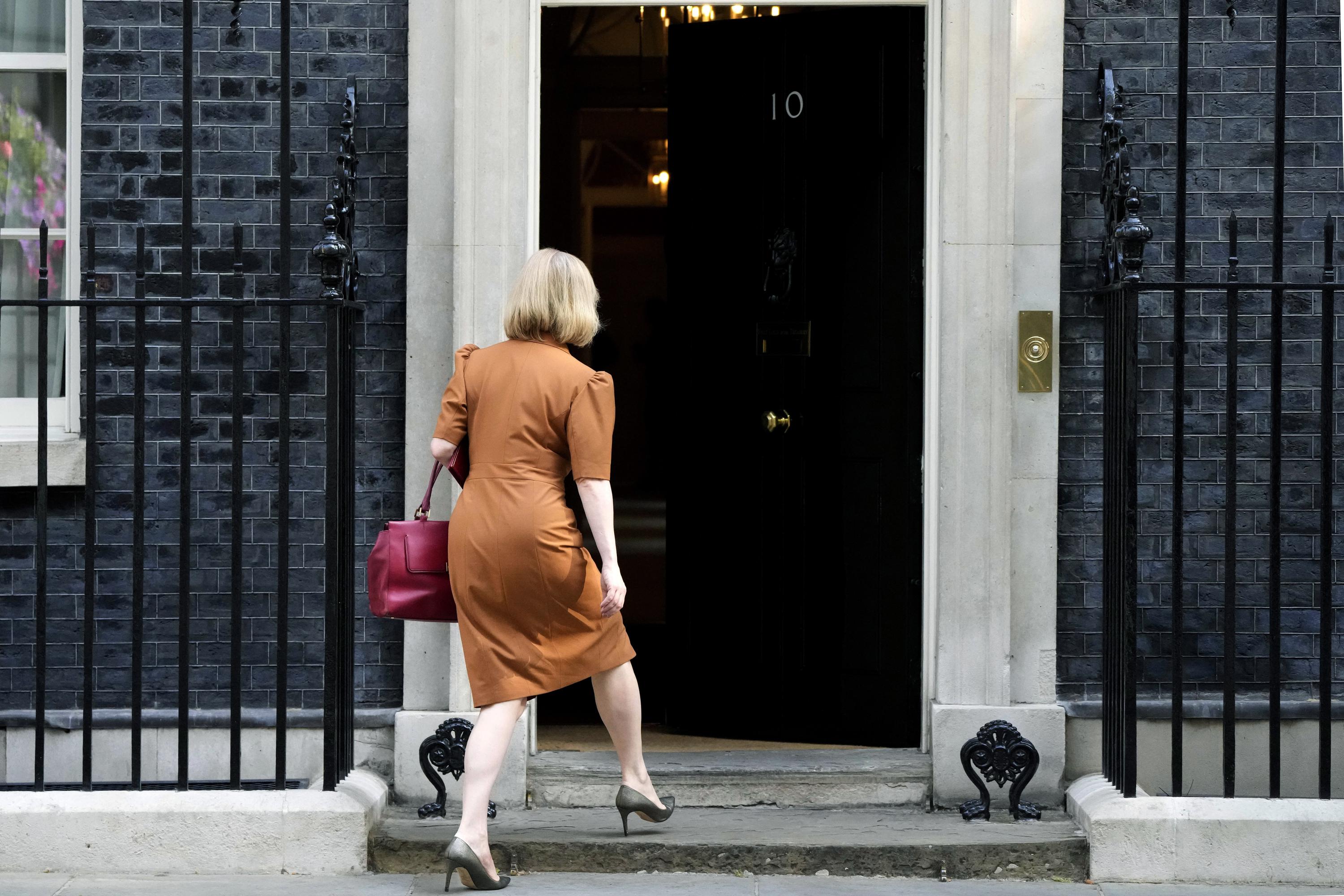 Liz Truss: A Thatcher heiress determined to shake up Britain

LONDON (AP) — As a child, Liz Truss took part in protests against Conservative Prime Minister Margaret Thatcher. As an adult, she came to admire Britain’s first female leader – and now she’s set to step into No 10 Downing St. with a Thatcherite zeal to transform the UK

Truss, Britain’s foreign secretary, was named the winner on Monday of the competition to replace scandal-ridden Boris Johnson as leader of the Conservative Party and the country’s prime minister. The party said Truss won the votes of about 57% of Conservative members, compared to about 43% for former Treasury chief Rishi Sunak.

Members of the Conservative Party endorsed Truss’ wishes to cut taxes and red tape and maintain Britain’s unwavering support for Ukraine. Some see echoes of the Iron Lady – as Thatcher was known – in Truss’ vision of a “network of freedom” linking democracies around the world.

For critics, Truss is an inflexible ideologue whose right-wing policies will not help Britain weather the economic turmoil unleashed by the pandemic, Brexit and Russia’s invasion of Ukraine..

Mark Littlewood, a libertarian commentator who has known Truss since college, said the new British leader was less a conservative than a “radical”, who – like Thatcher – wants to “roll back state intervention” in people’s life.

“I expect a lot of fireworks, a lot of controversy and a lot of action,” he said.

Born in Oxford in 1975, Mary Elizabeth Truss is the daughter of a math teacher and a nurse, who took her to anti-nuclear and anti-Thatcher protests as a child, where she remembers having shouted, “Maggie, Maggie, Maggie – out, out!”

In a 2018 speech, she said she started developing her own political views early, “arguing against my socialist parents in our left-leaning household.”

The family lived in Paisley, Scotland, before moving to Leeds, in the north of England, where Truss attended a public high school, setting her apart from her many privately educated Tory colleagues.

During the leadership campaign, Truss highlighted his relatively humble background. But she annoyed some former classmates and teachers when she said students at her school were “disappointed with low expectations, poor educational standards and a lack of opportunities”. The school’s alumni include scholars, judges and several other members of parliament.

Truss went to Oxford University, where she studied philosophy, politics and economics – the degree of choice for many aspiring politicians – and served as president of the university wing of the Liberal Democratic Party. Economically centrist Liberal Democrats support constitutional reform and civil liberties, and Truss was an enthusiastic member, posting “Free the Weed” posters that called for the decriminalization of marijuana and advocating in a speech for the abolition of the monarchy.

Littlewood, who was a member of the Oxford Lib Dems and now heads the Institute for Economic Affairs, a free market think tank, remembers Truss as “stubborn, determined and outspoken”.

“You never doubted his position on an issue or on a person,” he said.

After Oxford, Truss joined the Conservative Party – “when it was distinctly unfashionable”, she later said.

She worked as an economist for energy company Shell and telecommunications company Cable and Wireless, and for a centre-right think tank while engaging in conservative politics and espousing Thatcherite free market views. She was a local councilor in London and stood twice unsuccessfully for Parliament before being elected to represent the East England seat of South West Norfolk in 2010.

She won the Tory seat safely after a bump in the road – some local Tories were outraged when it was revealed she had an affair with another MP while the two were married to other people . Truss won over her critics and her marriage survived. She and her husband Hugh O’Leary, an accountant, have two teenage daughters.

She founded the Free Enterprise group of Thatcherite conservative lawmakers who produced ‘Britannia Unchained’, a political treatise that notoriously included the claim that British workers are ‘among the worst idlers in the world’.

David Laws, a former Cabinet minister who worked with Truss in government a decade ago, called her energetic and “a breathtakingly ambitious”, comparing her in his memoirs to “a young Margaret Thatcher at speed “.

Truss secured her first Cabinet post as Food and Environment Secretary in 2014, making her biggest impression with a much-derided speech in which she thundered that it was ‘a shame’ that the Great -Bretagne imports two-thirds of its cheese.

In Britain’s 2016 referendum on whether to leave the European Union, Truss supported the losing side of the “rest”, although she says she has always been a natural eurosceptic. Since the vote, she has won over Brexiteers with her no-compromise approach to the EU.

She became Justice Secretary, but was demoted to a more junior position in the Treasury in May 2017. When May was unseated by her repeated failure to break a political deadlock over Brexit, Truss was one early supporters of Boris Johnson to replace her. When he won, Johnson was named Truss’ trade secretary, a role in which she toured the world on Instagram signing post-Brexit trade deals and raising her profile.

In September 2021, she was appointed Foreign Secretary, Britain’s top diplomat. Her performance drew mixed reviews. Many praise her tough response to the invasion of Ukraine, and she secured the release of two British citizens imprisoned in Iran, where her predecessors had failed.

But European leaders and officials who hoped she would bring a softer tone to Britain’s relationship with the bloc have been disappointed. Amid trade wrangling, Truss has introduced legislation to tear up parts of the binding UK-EU divorce deal signed by the two sides. The 27-nation bloc is in turn taking legal action against Britain.

Truss sometimes suggested that the frequent comparisons to Thatcher were sexist, but at other times she encouraged them. She posed in a British Army tank in Eastern Europe, evoking an image of Thatcher during the Cold War. During a televised leadership debate, Truss sported a pussy-bow blouse like the one Thatcher wore.

By emphasizing her humble origins, she conjures up comparisons to the grocer’s daughter Thatcher, said Victoria Honeyman, associate professor of British politics at the University of Leeds – “the working-class girl who did well”.

Truss’ own personality is hidden behind a stern public persona. Friends say she has a fun side rarely seen in public and loves karaoke and tunes from Taylor Swift, Whitney Houston and Destiny’s Child.

Truss’ perceived loyalty to Johnson, who remains popular with many conservatives, also helped her win. Many party members cited Sunak’s decision to leave Johnson’s cabinet in July as a mark against him. Truss hasn’t quit, saying she’s a ‘loyal person’ – despite courting party members for months at ‘fizz with Liz’ events to build support for a potential run for president. direction.

The wider British electorate is likely to prove a more difficult audience to win over. Times are tough and getting tougher as inflation soars and Britain’s cost of living crisis deepens. Truss’ focus on stimulating the economy through tax cuts shouldn’t bring much relief in the short term.

Truss doesn’t have long to convince voters she’s on the right track. The next national election is due to take place in two years.

“Will Liz be able to say in 2024, ‘Are you richer now than you were when I became Prime Minister?’ Maybe,” Littlewood said. “But it’s not an obvious slam dunk.”

Mallya, remittance recipients did not deposit money until August 18: DRT agent at SC

Inheritance tax: what is it and what is the threshold? | Personal finance | Finance