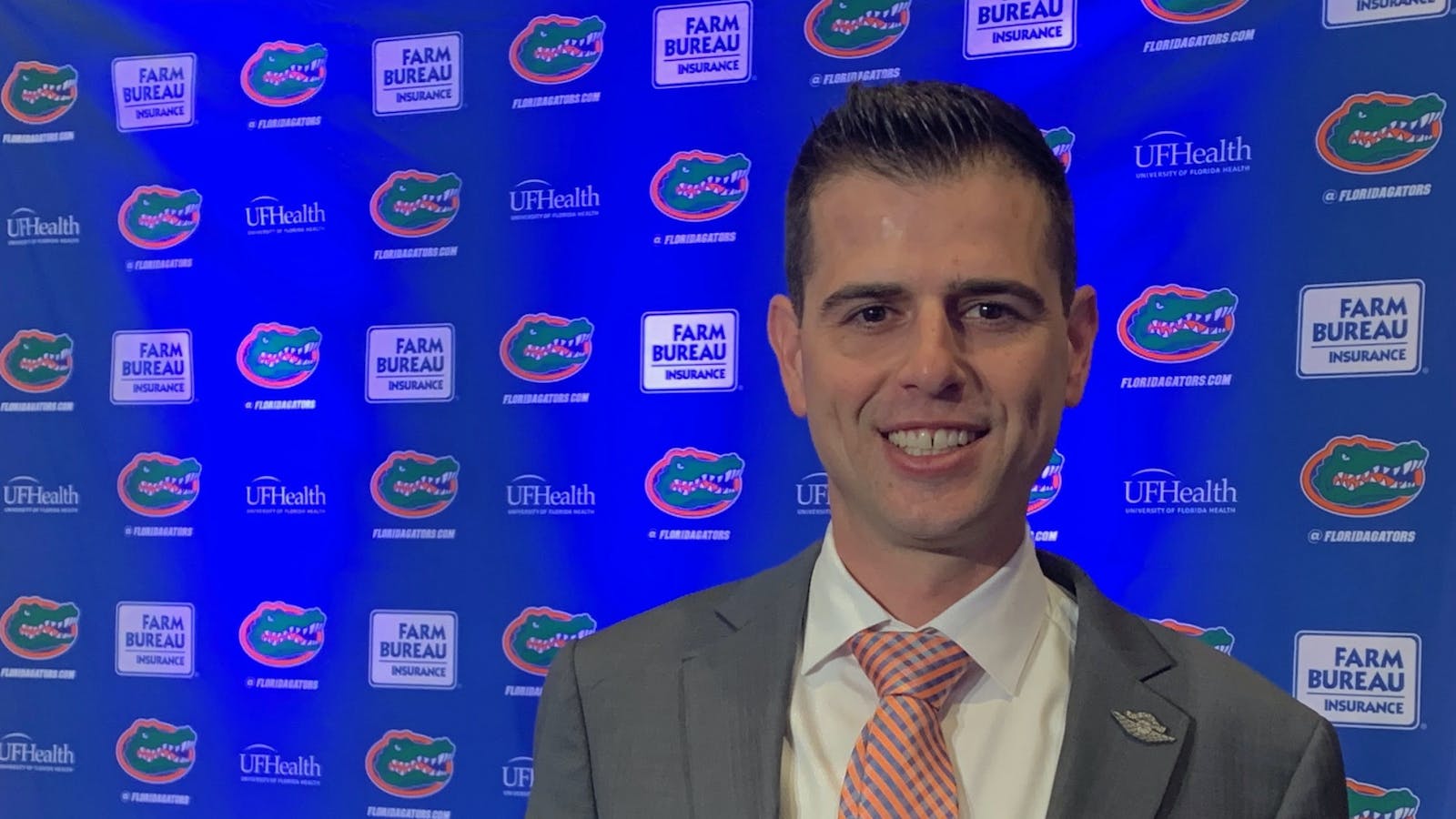 Todd Golden has always held Florida’s basketball program in high regard. When UF athletic director Scott Stricklin called the 36-year-old coach, he knew he had to pick up the phone.

Following the departure of Mike White on March 13, Stricklin wasted no time bringing in the hottest name in the coaching market. Golden was hired on March 18 and officially introduced on Wednesday.

“We’ve spoken to an overwhelming number of people in and around the sport of basketball,” Stricklin said. “Whether it was someone from the NBA or someone from college basketball, Todd’s name kept coming up.”

Golden’s rise to prominence in basketball circles did not happen overnight and his connection to analytics began early in his life.

As a young child, Golden would sit at his kitchen table having breakfast with his father, Scott.

While Golden packed up for a day at school, his father read the paper. After scouring the sports section, he passed the newspaper to his son.

The obsession with stats followed Golden through high school and then his time as a point guard at Saint Mary’s College.

While playing for the Gaels from 2004 to 2008, his coaches Randy Bennett and Kyle Smith calculated around 40 different stats during games and practices, using them as learning opportunities for their players.

“I saw what it did for me and the opportunities it gave me,” Golden said. “It would be silly if I didn’t take advantage of it as a coach.”

Beyond his university studies, Golden has traveled abroad to play professionally in Israel. He spent two seasons with Maccabi Haifa of the Israeli Basketball Premier League from 2008 to 2010. Golden then returned to the United States and began working in corporate marketing and sales.

Enjoy what you read? Get content from The Alligator delivered to your inbox

His first job was at IMG College and his second at Comcast SportsNet Bay Area. The years Golden spent putting his business administration degree to good use revealed a desire to reconnect with the sport he loves.

“I didn’t want to come to work in a suit and tie every day,” Golden said. “It gave me the shock I needed to get back to basketball and coaching.”

Two-year stints at Columbia and Auburn got Golden into the mix. He followed the same trajectory with both programs, entering the gate as director of basketball operations and then transitioning into an assistant coaching role.

In Colombia, Golden worked under one of his former Saint Mary’s coaches, Smith, who landed the main gig with the Lions in 2010. The connection would prove fruitful again for Golden in 2016, but he has to first plunged into the SEC.

Golden joined Bruce Pearl’s team at Auburn in 2014. During his time with the Tigers, he began to rely more on his analytical mind. Golden led Auburn’s measurement data breakdowns and spent time getting used to the conference landscape.

“Really, those two years made me very comfortable in the process with Scott,” Golden said. “Talking about what we could do [at Florida] and different things that we could take from the first two years of construction [Auburn] and what we could transition here”

After leaving Auburn, Golden would reunite with Smith another time, jumping to the University of San Francisco as associate head coach from 2016-19. The job would ultimately give Golden full control of the Dons in 2019.

It took USF a while to break into the national arena, despite a 22-win season in Golden’s freshman year.

Playing in one of the top mid leagues, the West Coast Conference and among the Gonzaga Giants was no easy task. Still, the Dons would find success and snap a 24-year drought in the NCAA Tournament last season. San Francisco won 24 games and earned a No. 10 seed in the big dance, eventually being bounced by No. 7 seed Murray State in the first round.

The year was Golden’s best and put him on the Gators’ radar.

While in Florida, he aims to bring the program back to its former prominence. Expectations can never be too high, Golden said.

The source of those expectations is legendary head coach Billy Donovan, who spent 19 seasons at UF with a 467-185 record and brought the school two national championships.

Golden understands how impressive the back-to-back title feat is. He was playing at Saint Mary’s during Florida’s best seasons under Donovan and followed those teams closely.

“I got to talk to Coach Donovan last Saturday for about 30 minutes, and it gave me goosebumps the whole time we talked,” Golden said. “I want to choose his brain. I want him to be a great resource for me. He’s a guy I look up to both from a coaching perspective and also as a man.

On Wednesday, Golden hammered home two points: He’s confident in his ability to lead and he wants to be at UF.

Golden wants to get off to a flying start and put together a full roster for next season. The Gators will see seven seniors leave and recently lost a commitment to five-star forward Malik Reneau. Golden aims to build a group of talented players by all means, working on the transfer portal and establishing a strong recruiting base.

When training its staff and initial team, Golden will target people who admire their opportunities.

“I expect my student-athletes as well as my staff to have an attitude of appreciation,” Golden said. “I won’t take anything less than super grateful guys to be a part of it.”

Building bonds with his players that go beyond anything transactional is essential to Golden’s coaching style. He wants to know his players personally and wants them to be proud to play for him and their school. Golden built that respect with his players in San Francisco and hopes to replicate it at UF.

“Make sure you know who their girlfriends are, what their social life is like, what kind of music they like to listen to,” Golden said. .”

Golden ended his opening speech with a pledge on behalf of himself and his future teams, encompassing the outlook for his tenure.

“We’ll be very proud to wear the orange and blue, and I can say from the bottom of my heart that I’m incredibly proud to be a Gator.”

The Independent Florida Alligator has been independent from the university since 1971, your donation today could help #SaveStudentNewsrooms. Please consider donating today.