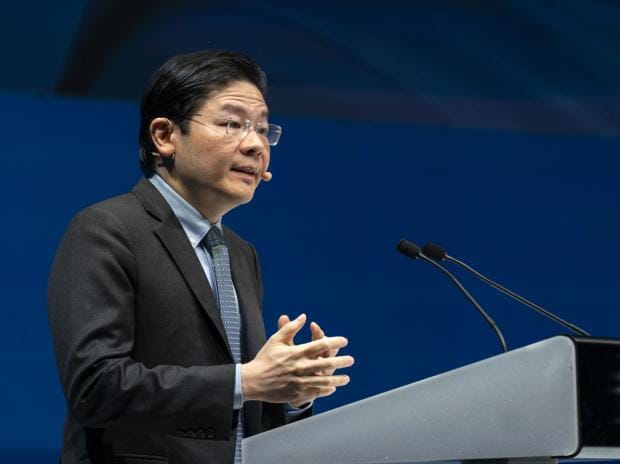 Singapore’s finance minister, Lawrence Wong, has been chosen as the new leader of the so-called fourth-generation team, paving the way for him to become the country’s next prime minister.

In an unusual move, Prime Minister Lee Hsien Loong, 70, announced the decision in a Facebook post on Thursday evening and detailed the consultation process which found “overwhelming support” for Wong among junior ministers. Wong would be Singapore’s fourth prime minister since independence in 1965.


There will be adjustments to cabinet appointments, Lee said. It will be the third cabinet change after the 2020 elections, when the ruling People’s Action Party retained power but recorded the weakest performance in nearly six decades.

“This succession decision is crucial for Singapore,” said Lee, who has served since 2004. “It will ensure the continuity and stability of leadership that characterizes our system.”

The appointment follows a year of uncertainty over who would lead Singapore after Deputy Prime Minister Heng Swee Keat stepped down as heir apparent, saying he would be too old to take over once the pandemic is over. Lee had postponed his decision to retire before turning 70 in 2022, citing a desire to hand over Singapore “intact” and in “good working order” for the next team.

Questions about Heng emerged after the party suffered its worst parliamentary showing in the 2020 election despite winning 89% of seats, as the opposition pushed for measures to help low-income Singaporeans and hire locals rather than foreigners. When Lee announced the leadership reshuffle last year, he said his goal was to identify a successor before the next election due in 2025.

Three candidates emerged, including Wong, Health Minister Ong Ye Kung and Education Minister Chan Chun Sing. However, Wong stood out for his leadership in explaining the initial approach to Covid-Zero and then moving on to living with the virus.

In a show of unity broadcast on social media, the other two frontrunners congratulated Wong and pledged to work as a team. It is likely that they will become Wong’s right hand to govern Singapore.

Wong, 49, said he was “humbled and grateful” to lead. “I will do my best to fulfill this responsibility. But as we have been repeatedly reminded, the right to lead cannot be inherited,” he said in a Facebook post.

Unusually, Lee took to Facebook to detail the selection process that began when he asked PAP Chairman Khaw Boon Wan to speak individually to fourth-generation ministers for their “private personal opinions.” “. Lee and two other senior ministers did not take part in the process.

Khaw presented his collective views to the rest of the cabinet and to Lee who endorsed Wong’s junior ministers’ choice as successor on Thursday. It was then presented in the evening to PAP lawmakers, who also accepted the decision.

Wong’s confirmation as heir apparent is just the first of many steps to the top job. In November, the ruling party will normally hold biennial elections for its central executive committee which are expected to see Wong elected as the first deputy general secretary, a precursor to serving as prime minister.

Based on past practice, the Prime Minister of Singapore would typically lead the PAP to elections once more and then hand over power to his successor approximately 12 to 18 months into the term. Singapore’s next polls are due to take place by November 2025 and by then Lee would be 73 years old.

The PAP usually organizes elections well before the expiration of the mandate. It’s possible Lee will call an election a year earlier, in the last quarter of 2024, and reach out to voters to tell them he trusts Wong and the fourth-generation team, said analyst Eugene Tan. politics and law professor at Singapore Management University.

“The government needs time to rebuild the ravaged economy. Nothing beats going to voters with a strong ballot for the subject known as the economy,” he said.

Wong entered the political fray in 2011 serving in various positions in the defense, communications and information ministries. Since then, he has been instrumental in Singapore’s pandemic response, co-chairing a government task force and serving as Vice Chairman of the Monetary Authority of Singapore.

In February, he used his first budget speech as finance minister to raise taxes on the top 1% and announce increased consumption levies to rebuild finances after the pandemic.

Debate: Are the new RMD regulations for successor beneficiaries too complex?