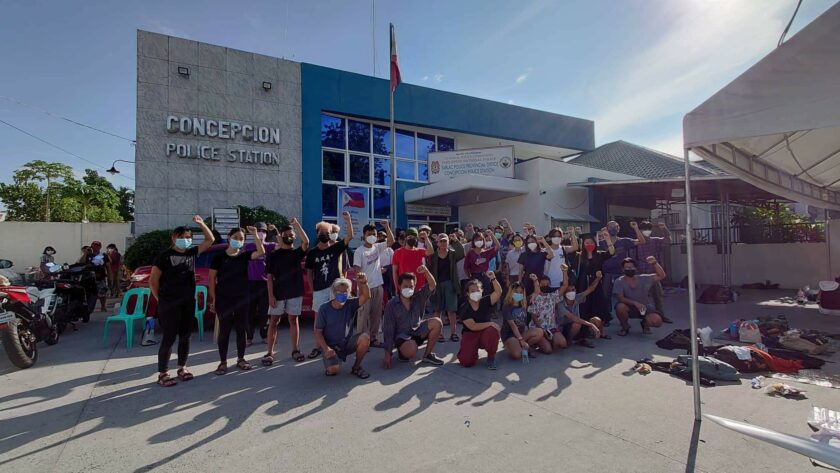 “The threat of additional plans also remains as Noel Villanueva and his minions cling desperately to the land of farmers in Tinang. We remain vigilant.

MANILA – Peasant groups hailed the dismissal of the lawsuits against the 83 farmers and their supporters, collectively known as #Tinang83, as the court granted the motions to dismiss information with merit on June 27, Monday.

The Tinang 83 have been charged with malicious mischief and unlawful assembly after police violently arrested them on June 9 while peacefully carrying out cultivation activities.

The malicious mischief information is also quashed by the court because 1) the facts charged do not constitute an offense 2) the third element of malicious mischief was not alleged here 3) the court has no jurisdiction over the subject matter of the case (which involves an agrarian conflict).

The court also referred the land dispute case to the Department of Agrarian Reform (DAR) as it has no jurisdiction over the matter.

In his 13-page ruling, Pangan said section 19 of RA 9700 or CARPER Act states that cases relating to the implementation of the Comprehensive Land Reform Program (CARP) should be referred by the judge or prosecutor. at DAR.

“…if there is an allegation by either party that the matter is of an agrarian nature and that one of the parties is a farmer, farm laborer or tenant, the matter will automatically be referred by the judge or the prosecutor at the DAR who will determine and certify within 15 days of referral if there is an agrarian dispute,” he said.

The tribunal also said that while the plaintiffs (the cooperative) claimed ownership of the land, “CARP beneficiary farmers who have obtained the Certificate of Land Ownership (CLOA) all have the right to own and cultivate the land.”

Citing a Supreme Court decision, Pangan said CLOAs are “sufficient evidence to give the holder the right to own land, and are issued as preparatory steps for the eventual issuance of a certificate of title after compliance with certain conditions/prerequisites”.

The court also took judicial notice that the DAR had already issued a certificate of finality on April 2, 2018, ordering the DAR Tarlac to immediately distribute 200 hectares of land registered collectively in the names of Teresa Villanueva, et al.

The court added that even the plaintiffs “admitted that ownership of the land remains ultimately determined by the DAR.”

Kilusang Magbubukid ng Pilinas (KMP) welcomed the court ruling but said the struggle of farmers in Tinang continues as they have not yet been settled as land beneficiaries.

“The threat of additional plans also remains as Noel Villanueva and his minions cling desperately to the land of farmers in Tinang. We remain vigilant,” the group said in a statement.

The Tinang SN. Multipurpose Cooperative Inc. Was established by the Villanueva family and took control of the land. In April 2021, the Villanuevas even filed a petition seeking to rescind and halt the implementation of the DAR’s order to distribute the land to 236 land reform beneficiaries.

“Due to their machinations and desperation to maintain control of Hacienda Tinang, #Tinang83 faces even more baseless charges: disobedience, usurpation of real rights and obstruction of justice,” the group said in a statement.

They also received reports that 10 of #Tinang83 will be charged with “child exploitation” while 6 will face “human trafficking” charges.

Besides the dismissed charges, #Tinang83 has also been charged with disobeying a person in authority, obstruction of justice, and usurpation of real rights.

Lily: Tinang farmers: We are not criminals

But the band said they won’t be cowering.

“We know we are fighting for what is right, what is right and what is true. We are humbled and empowered to know that none of us stand alone when we #StandWithFarmers. We know our collective action will lead to many more victories against injustice, not just for #Tinang83 but for countless others,” the group said. (RTS)