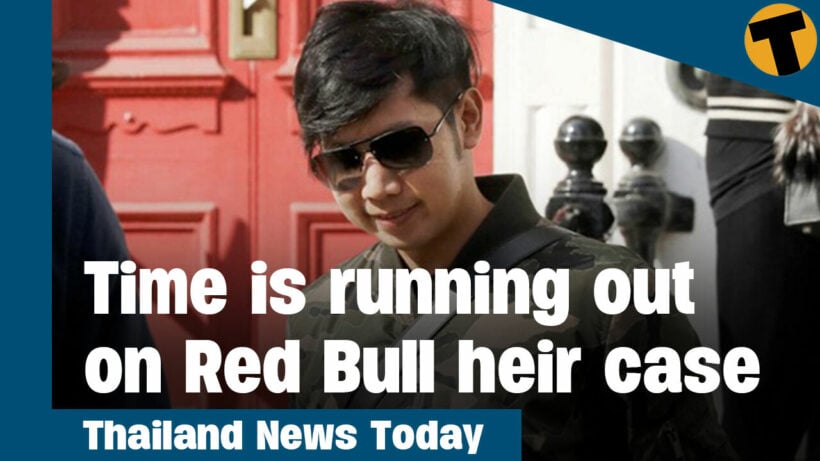 Prosecutors say time is running out to prosecute fugitive Red Bull heir Vorayuth Yoovidhya and they can’t extradite him…because they don’t know what address to put in the extradition warrant.

The heir to the Red Bull energy drink empire has been charged with 2 counts in the death of a Bangkok police officer killed in a hit-and-run with Vorayuth’s Ferrari in 2012. The charge against him for cocaine use is expected to expire in September of this year. Vorayuth was also charged with reckless driving causing the death of another, with the statute of limitations on that charge expiring in 2027.

According to Dr. จุมพล พันธ์สัมฤิทธิ์ the case has not yet been referred for extradition, due to the fact that there is no confirmed address for Vorayuth, as he says that several laws and treaties require a possible address. as one of the three essential conditions for extradition.

The attorney general’s office says the police only sent them a copy of the court arrest warrant, but it’s an extradition warrant that they need before they can take steps to seek extradition.

Thailand’s Deputy Prime Minister has told would-be cannabis cultivators that they should relax for now as the new law removing cannabis from Thailand’s controlled drug list is not yet in effect.

Wissanu Krea-ngam, who points out that the regulations only affect some cannabis products, not all. The law will be implemented 120 days after it is announced in the Royal Gazette. At this point, Wissanu says there will be more clarity on what constitutes legal cannabis use.

On Tuesday, the Narcotics Control Board approved the Department of Public Health’s proposal to legalize cannabis and hemp, except for cannabis extracts containing more than 0.2% THC by weight. How they can realistically enforce this, no one knows.

Meanwhile, Health Minister Anutin Chanvirakul’s Bhumjaithai party is proposing a bill to regulate the use of cannabis for purposes other than medical or research. However, this new law risks Thailand violating 3 international anti-narcotics conventions to which it has previously acceded.

According to the report, the oldest convention dates back to 1961 and requires legal enforcement against narcotics in signatory countries. The conventions prohibit the use of cannabis except for medical or research purposes. But Wissanu believes the bill would help ease concerns and show that the country remains vigilant and committed to controlling cannabis use.

Simply put, we just have to sit back and wait for the bureaucrats to try to fix the old bureaucracy with more bureaucracy. Let’s move on to the next story.

Koh Samet’s fragile tourism sector, already battered by restrictions, now faces another threat from an oil spill heading towards the island and nearby beaches.

สิรินทิพย์ ทัพมงคลทรัพย์ recalls a 2013 oil spill on the island where locals had worked desperately for years to prevent it from happening again.

She goes on to say that the natural resources of the beach have still not recovered from the previous leak and despite the incident which occurred in only one area, the huge amount of crude oil resulted in poor quality of the air throughout the island and has affected tourist demand.

The pollution control department indicates that up to 200,000 liters of the spill of 400,000 liters are directed to the beach of แม่ำำ พึง and the other beaches of the เขา แหลม หญ้า National Park and หมู่ เกา ดูเเกา ดู the ministry. that unless something can be done the oil should hit the shore tomorrow afternoon.

Tourism has already been hit hard in the eastern province of Rayong, where Koh Samet is located, but Sarinthip says the oil spill is potentially a bigger threat to tourism than the pandemic. This will mean that tourists cannot swim in the sea and seafood could be contaminated. She urges the government to do whatever it takes to mitigate the damage.

Efforts continue this morning to mitigate the fallout from an oil pipeline leak in waters south of Pattaya, off Rayong. The leak occurred at an offshore mooring point where tankers load and unload.

About 160,000 liters of oil began floating in the waters off the coast on Tuesday as the company Star Petroleum Refining tried to stop the oil from reaching Rayong beaches.

The Department of Marine and Coastal Resources, the Navy and other environmental agencies were called in to mop up the potential environmental disaster.

For Koh Samet, another deterrent to tourism is the requirement to present a negative antigen test taken no later than 72 hours before arrival. According to recent reports, the rule is causing many tourists to change their travel plans and head elsewhere.

The move follows the death of a Bangkok ophthalmologist while using a zebra crossing on Phaya Thai Road in Bangkok last Friday. Dr. วราลัคน์ สุ-ภ-วัตร-จ-ริ-ยา-กุล was hit by a Ducati motorcycle driven by a 21-year-old off-duty police officer. His death sparked public outcry over the continuing dangers of attempting to use pedestrian crossings in Thailand.

A member of the Life Quality Development Network, a study by the Road Safety Policy Foundation shows that approximately 500 people are killed each year in accidents at these level crossings in Thailand. This represents 6% of road deaths, including a third in Bangkok. She says road safety advocates will keep a close eye on the inquest into Dr Waraluck’s death, pointing out that drivers who break traffic laws often end up with suspended sentences.

His concerns are echoed by a member of a network affiliated with the Don’t Drive Drunk Foundation, who says pedestrians have the right to be able to cross the road safely at designated crossings. He wants the law changed so that drivers who cause the death of a pedestrian while using a zebra crossing can be charged with manslaughter.

A 27-year-old man was found lying in a pool of his own blood on the beach in Pattaya with his face seriously injured. A nearby beach vendor found the man around 11.30pm last night after hearing men screaming.

The vendor told responders he did not clearly see the man being beaten, but heard three men arguing over the money. The incident happened near the Central Festival shopping mall.

The salesman says he rushed over, but the men were gone and the 27-year-old lay beaten on the ground. The victim was transported to a local hospital for treatment. Reports indicate that the man appeared to be severely intoxicated.

Police are currently reviewing CCTV footage in the area. No arrests were made.

This is the second time in recent weeks that a person has been assaulted on Pattaya beach. Earlier this month a Swedish man was slapped and threatened while sipping a beer alone on the beach.

In a separate incident whether or not authorities are yet aware, police arrested a shirtless foreigner at a supermarket last night in South Pattaya. The man allegedly harassed residents by shouting and trying to start fights. According to the police, he appeared very drunk. They eventually arrested the man and brought him to the station to slap him with multiple legal charges.

Subscribe Where Join our YouTube channel today and become a Thaiger Legend or Thaiger Cub for behind-the-scenes footage and other members-only benefits.